Rough estimation gives around 450 different applications of laser radiation in almost every field of human activity. The industrial applications may be considered as the most highly developed and widespread. Processing quality as rather wide term, includes surface roughness, precision, productivity, stability of different other parameters and factors, etc. In proposed paper only limited specific factors are discussed, depending on type of processing and possibilities which are especially efficient in combination with some other techniques or in hybrid technologies… At the beginning of laser technology development the additional supply of energy to processing zone had been considered as efficient way to decrease the consumption of expensive “laser energy” for improvement the processing quality (surface roughness, dimensions and shape corrections, etc.) by use of electric discharge - electro-laser processing, electric arc + laser, flame + laser, plasma + laser, etc. For welding, cladding, local alloying the amount of influencing factors is much wider –development of new powder compositions, type and concentration of elements in powder compositions, the techniques and conditions of gas-powder and laser radiation transportation into the processing zone, etc. The key factors for processing efficiency increase in those cases are the following: type of feeding system, design of nozzles, corresponding control over the powder and radiation homogeneous distribution in the cladded zone, etc. Different versions of feeder for radiation and gas-powder mixture design had been developed and their prototypes had been tested. The slot type of feeder had demonstrated the excellent characteristics – the ability to control in quite wide range their shape of clad from spherical up to rectangular as well as powder distribution, etc. Some other innovations are considered and discussed. The potential for new developments is quite wide and prospects for new improvements are optimistic. 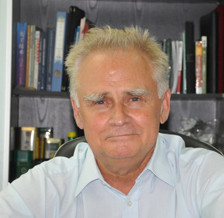 Chairman of the Annual Ukraine Conference on Laser Technology and Nonconventional machining   processes; Chairman of the Qualification Degree Council at KPI; Council Chairman of the State Supreme Qualification Committee of Ukraine (until 1998), Member of the State Accreditation Committee of Ukraine, Co-Chair of the International Conference on Laser Technologies in Welding and Material Processing (LTWMP), Crimea, 2003, 2005, 2007, 2009, 2011, 2013, 2016 (Odessa).